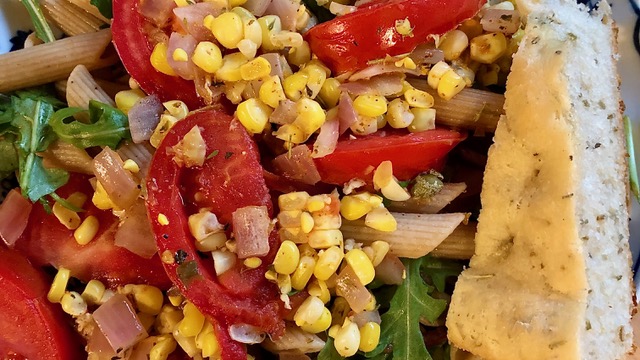 One Sunday afternoon in late summer, the bread baker in the house was making his special Rosemary Focaccia (bread) while the plant-based cook contemplated a main dish using fresh corn and tomatoes. With some substitutions and alterations to a pasta recipe in The Runner’s World Cookbook, this dish arrived at the table a little while later. Use your imagination and what you have on hand to create something similar! Note that there’s no added oil in this recipe, but lots of flavor from the combination of vegetables plus lemon juice, herbs, and brine of capers and olives.

In a large skillet or pot, combine 3 Tbsp of the broth or water along with onion and garlic and cook on medium heat for 3 minutes. Add corn. Simmer for 2-3 minutes. Add remainder of veggie broth and all remaining ingredients except arugula and simmer for 5 minutes, adjusting seasoning as needed.

If the pasta has cooled, add it to pan to reheat for a few minutes, letting it absorb some of the liquid. Then, when ready to serve, add most of the arugula to pan, stirring very briefly to blend and allow the arugula to wilt just a bit from the heat. 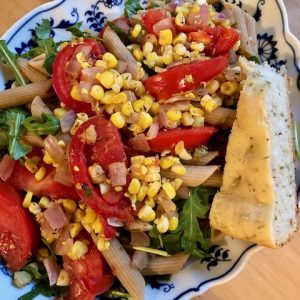 Transfer to serving dish and garnish with the remaining arugula. (Arugula or other greens cook down to almost nothing, so you want to add some fresh greens just prior to plating.)

Classes Employee Wellness Food For Life Classes Food Service Kitchen Tips News Nutrition Plant-Based Kitchen Classes Recipes
We use cookies to ensure that we give you the best experience on our website. Information is stored and saved, according to our Privacy Policy.Keep GoingPrivacy policy